Usually, bride and groom arrive at the wedding in a stylish and luxury chauffeur driven cars. And why not! the wedding is the big day of their life. Some couples prefer to hire luxurious Rolls Royce while other prefer to book stretch Hummer Limo and the sports enthusiast hire dashing Bentley. Every wedding car itself represents its charm and beauty.  But sometimes this grace and beauty go wrong.  Yes, you heard it right.

Down here we have shared a list of the ten weirdest vehicles that hired were by the couples as a wedding car.

Ambulance: Are you dying to get married? Then hire an ambulance as your wedding car. Past year, a couple used an ambulance for marriage which had purple carpet and all the trappings of the limousine.

Tuk Tuk: Anyone who has been to Thailand is much familiar with the Tuk Tuk. But who thinks that it can be used it as a wedding car? An Australian Couple recently used Tuk Tuk as a vehicle of marriage in their Thai wedding.

Submarine: We know you are not going to believe us, but apparently a Columbian drug lord hired a submarine to smuggle themselves into the United States to get married in Miami. The bride must be lucky.

Ox and Cart: In recent times, the ox and cart were used as the mainstay of transport for many Asian and African countries. But who thinks to use it as a wedding car. A few years back, a saw a Thai Buddhist wedding where the groom arrived at the wedding on ox and cart.

White Pony: A groom in Korea came at his wedding on a white horse. In Korea, the white pony is considered as a status symbol.

20 Wheel Limousines: Well, hiring a limo for the wedding is the ideal option. It can easily accommodate lots of passengers together, but a limousine with 20 Wheels can almost fit the entire wedding guests.

Wedding Tank: Well, we all know getting married is the equivalent of going to the war. And a US couple proves that when the groom arrives at the wedding venue in a vintage military tank. 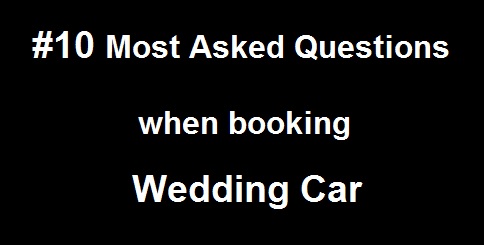